The day started off a little unusual from previous tours with the unfortunate discovery of a broken window on the hire van and robbery of the items we planned to gift to businesses and individuals along the trip. The ‘salt into the wound’ for the situation was the fact that they had taken the food and water supplies also, but the resilience naturally enstilled in Australian dairy farmers meant we all pushed on to keep to the itinerary timeline.

Image: The group at Federated Farmers of New Zealand.

Nick Clark from the Federated Farms of New Zealand (FFNZ) gave us a valuable insight to the scope of the organisations, and how it has come to date with a membership base of 14,000 farmers. Nick explained, similar to that of the Victorian Farmers Federation (VFF) FFNZ had separated itself into commodity groups. Interestingly, their system operated on volunteering membership and not a Levy based approach. We linked up with two policy members that sit on the dairy committee. Similar to that of the UDV these two individuals were currently active dairy farmers that were providing advice for the creation of policy. The issues that the FFNZ discussed as “hot topics” were similar to that of our industry in Aus. Attracting and retaining people (mainly young people) into agriculture, animals activisms, bobby calves, foreign investment, the use of social media to engage the public and farming safety (OH&S) for employees, were all notions of concern we were familiar with. However, the greatest area of unrest for the FFNZ was mainly to do with the environmental impacts of the dairy sector (leaching nitrates into the water table) on water quality. A strength of the FFNZ was undoubtedly in their ability to both address issues highlighted by the public but also their ability to take a proactive approach towards issues outlined.

Image: Peter Hancox speaking to the group at the Lincoln Demo Dairy Farm.

Following a debrief over lunch and coffee, we solidered on to the Lincoln Demo Dairy Farm. This project is funded by the South Island Dairying Development Centre, DairyNZ and a number of other private supportive services companies. The manager, Peter, gave us a overview of the 160ha, previously 650-680 cow operation. The farm was irrigated by both centre pivot and lateral irrigators. The centre pivot can deliver up to 52 litres a second or rather, 6 mmls across the farm in 24 hours. 2 deep-dug bores irrigated the farm for roughly 80 days a year. It also produce 18-22 tonnes of dry matter per hectare (DM/ha) and all with only 3.6 labour units. Peter described that the focal point of the farm was now to maintain similar production under the new policy that is set to be rolled out in 2017 for reducing leaching of nitrogen into the water table. The aim of the business was to reach a leaching threshold of no more than 36kg/N per year. To achieve this the enterprise reduced cow numbers back to 550 and was looking at technologies for identifying urine and excretion patches in field and apply fertiliser with these exclusion areas in consideration. We wrapped up the session at the demo farm by assessing the impressive chicory, ryegrass and clover paddocks that had received only effluent applications throughout the year.

Image: Checking out the chicory, clover and ryegrass pasture.

The last stop of the day was at PGG Wrightson Seeds breeding farm in Lincoln. The business is the largest plant breeding operation in NZ and was engaged with several joint ventures. 70% of the plants produced by PGG Wrightson was pasture based with the remain 30% spread out across many different areas: Fodder Beets, brassica’s, maize, GM technologies etc. The representatives outlined that PGG Wrightson was working with CRC’s in Australia and New Zealand to improve endophytes issues in new ryegreass cultivars. An interesting point for me (Will) was that they were working hard with the end user to ensure they were getting the greatest possibly result from the investment. To achieve this PGG Wrightsons were providing agronomic and grazing advice to match the requirements of the plant and cultivars. A drive around the breeding area allowed the group to view exceptional Rye corn fodder crops, brassicas and wheat varieties. Fun fact: New Zealand hold the world record for the heaviest wheat crops, per hectare: 16/T/per Ha. 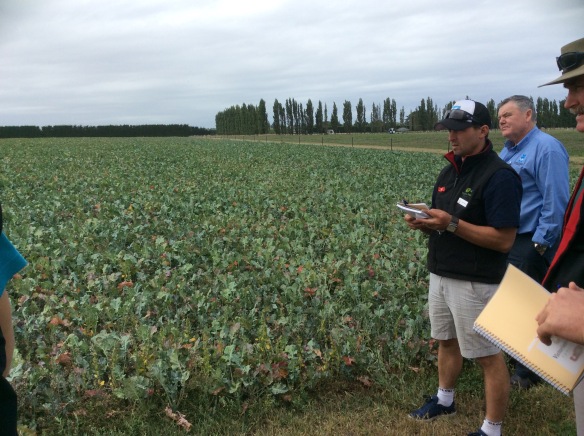 All in all, an amazing second day that has set a high bar for the groups following time in NZ. Bring on day 3. 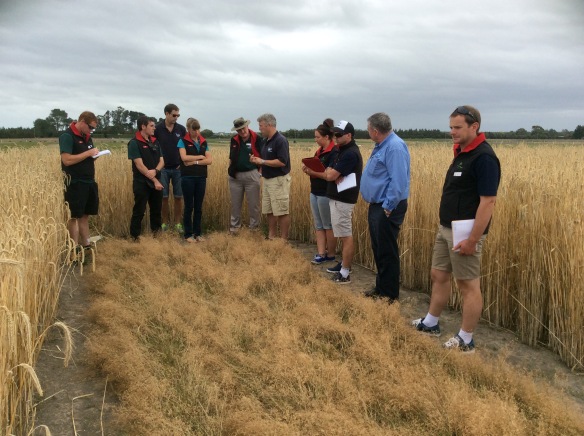